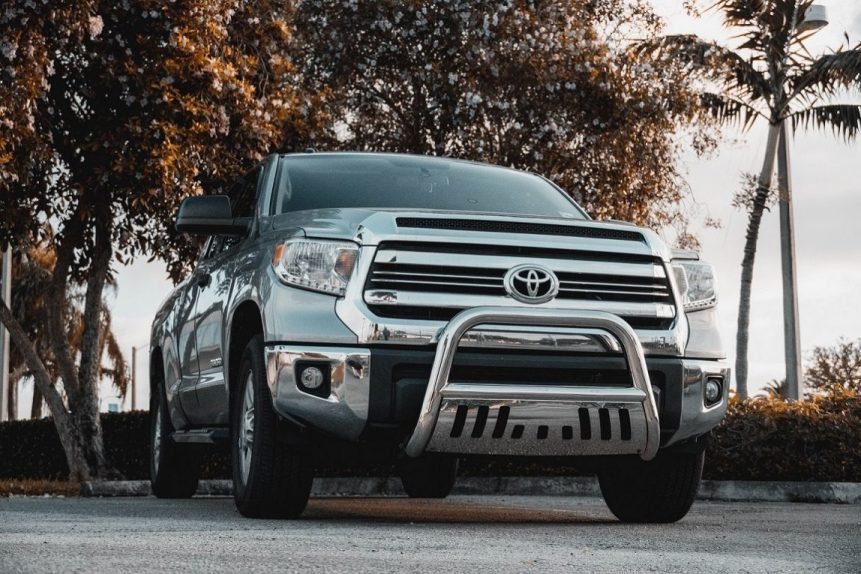 TUNDRA GRILLS Plus Other Accessories to Complement Them

Apart from the bumper, what dominates the front facia of the Toyota Tundra are its headlights and the Grille. The headlights illuminate the road and help us see where we are going. The Toyota Tundra Front Grille helps cool the engine while protecting the radiator. The Toyota aftermarket parts is an industry all its own, with on par or even better products than the OEMs they replace.

The Toyota Tundra is a popular truck in America that has proven its capabilities on and off-road. The pickup truck is a capable workhorse in various workplaces in the country. The Toyota Tundra has become a well-respected model in the domestic truck market, and it can hold its own on the dominant big three from Detroit.

Do you need to find the best fast?

Read on and know more about the other products on our list.

Toyota is also manufacturing parts for aftermarket sales. The Tundra is one truck for which Toyota also manufactures aftermarket replacement parts. One prime example of these is the Toyota Tundra aftermarket grill which aims to improve the front fascia of your Tundra to mimic that of the TRD variant. The Toyota Tundra TRD Grill uses the same high-quality materials as the OEM, on exacting standards. This Replacement Grill can be installed on almost all variants of Toyota Tundra from 2014 to 2020. Though, for some Tundra variants like the 2021 Toyota Tundra SR5, there is a need to buy a relocation bracket for a proper fit. The tundra pro grille can replace the OEM Toyota Tundra Grille.

The EAG Replacement ABS Grill Upper Front Hood Grille, designed as an aftermarket replacement for the 2014 Toyota Tundra Grille, can also replace the grilles of most Tundra variants up to the 2021 model year. Founded in 2010 by off-road enthusiasts, EAG or E-AutoGrills has catered to the automotive aftermarket industry by providing quality replacement parts like grills, replacement, and off-road bumpers. The EAG Toyota Tundra Grill Replacement, built with ABS plastic, is relatively lightweight at 17.64 pounds. It has the same dimension as the original grill at 61.02 inches long, a width of 18.5 inches, and a height of 9.65 inches. There are three amber lights at the upper portion of the grill. The EAG 2021 Toyota Tundra Grill comes in a Matte Black finish, both the surrounds and the honeycomb vent. Tundra owners can easily install the grill by removing the OEM grill first and replacing it with this.

Essentially the same as the EAG Replacement ABS Grill. Tidal is an authorized reseller of the EAG Brand. Made of ABS plastic, the Tidal 2020 Toyota Tundra Grill surrounds can be repainted to match the color of the Tundra body or any other color you would like. The three amber-colored LED lights help make the Tundra visible to other drivers. Made to the exact proportions of the OEM Tundra Grill installs using existing and standard mounts thus, the truck owner will not have a hard time installing it.

This 2007 Toyota Tundra Grill is a product of EAG, a well-known aftermarket automotive parts manufacturer. The said grill is the second entry in this list from the same company, and it fits most Toyota Tundra variants from 2007 to 2009 model years. The EAG Replacement grill weighs 16.64 pounds. The wire mesh insert is of stainless-steel construction, and it is powder-coated black. The surrounding plastic has rivets accents, and the outer shell is heavy-duty ABS plastic. What is good with ABS Plastic id= it can be painted with any color appropriate, just like a custom Toyota Tundra Grill. The rivets, wire mesh, and ABS customizable cladding help the 2008 Toyota Tundra Front Grill project a rugged façade.

The EAG Replacement Toyota Tundra Grill fits the 2010 to 2013 models of Tundra trucks. The design is like the EAG Replacement aftermarket grill for the 2014 to 2021 Tundra model years. Made of highly durable ABS plastic, the grill houses three amber LED lights at its top portion. These lights add an illuminating and aggressive presence to the Tundra’s front. Moreover, it highly helps in making the truck visible in dark situations. Owners will find the grill easy to install as it is also relatively lightweight. The ABS surrounding the grill is customizable with various colors.

For those who need more illuminating power during family adventures, the iJDMTOY lightbar is an indispensable companion. The LED bar goes inside the Toyota Tundra Hood Bulge or Hood Scoop. The Toyota Tundra Grill lights have LED components to ensure a bright and even illumination. The LED bar is 36 inches long with 108W of LED light power housed in a slim bar. The bar fits inside the hood bulge of the Toyota Tundra 2014 to 2020 models. Drivers needing extra illumination in dimly lit and unlit areas will find the iJDMTOY an indispensable accessory.

Toyota Tundra trucks from the model year 2007 to 2013 may experience discoloration and irreversible wear and tear of their headlamps. AKKON, a manufacturer of various aftermarket parts for almost all auto brands, has an alternative for you. The Akkon Replacement black headlights lend a modern touch to a rather old Toyota Tundra. The headlight design cues project modern influences, with black cladding and independent lightbulb compartments. The Headlamps are lightweight as they are of plastic construction. Installation is a straightforward bolt-on affair, and there is no need to modify anything.

The EAG Replacement Toyota Tundra Grill insert material is wire mesh stainless steel. It has an ABS plastic surround cover in a matte black finish, making it customizable with different colors as per owner preference. The EAG Toyota Tundra Front Grill fits models from 2003 to 2006. Tundra truck owners will appreciate the wire mesh grill as it prevents rocks, pebbles, and other debris from hitting the radiator and other engine components. The EAG 2003 to 2006 Toyota Tundra grill comes accessorized with rivets that enhance its ruggedness and go-anywhere capability. 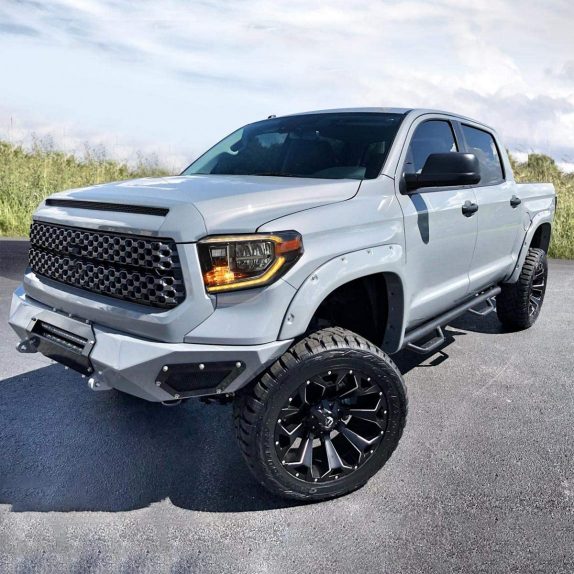 Toyota Tundra with the aftermarket Projector LED Headlamps from VLAND.

The VLAND Projector LED Headlights with Sequential Turn Signal was designed and manufactured to the exacting standards of an OEM Toyota Tundra Headlight. They have easy peasy designs that need no modifications on their casing and the truck headlight receptacle. The VLAND headlights aim to equal or even surpass the capabilities of the Tundra’s OEM Headlamps, thus enabling excellent visibility in various weather conditions, nighttime, and when lighting is generally needed. The VLAND Projector Led Headlights assembly has five lamps in total, the main headlight with both low and high beams, the signal light, an LED DRL, and a side marker. High-density and high-grade plastic for the headlamp assembly ensuring durability and protection from harsh conditions. Tundra owners with year models 2014 through 2019 will find the VLAND Headlamp replacements easy to install because they fit like stock Tundra headlamps. VLAND uses the existing mountings of your truck, and already included are all wiring harnesses in the package. One caveat, though, is that if your Tundra has no LED DRL, one should connect the supplied harness to the fuse box of the Tundra, especially for the Platinum and 1794 variants. All needed bulbs already come with the package, thus, eliminating the need for some trips to the auto supply store.

Toyota Motor Company was established in 1937 in Japan and has become one of the largest automobile manufacturers in the world. The company produces about 10,000,000 vehicles a year. Today, Toyota has manufacturing concerns in almost all seven continents. The company is well known for its dependable automobiles. Some examples are the popular Camry, the world-renowned Corolla, Land Cruiser, and the Toyota Tundra. The Tundra is a full-size pickup truck that is a popular workhorse for different businesses and among the off-roading crowd also. Toyota also owns the Lexus brand, a luxury car manufacturer. The company also manufactures many aftermarket products that complement and enhance the looks and improve the performance of its vehicles.

VLAND is an automotive accessories company that has been in operation for nearly 34 years already. Its main products are automotive and motorcycle headlights and taillights. The company’s product designs comply with the specifications of the OEM that they replace. The company has its R&D Department, which is primarily responsible for designing and developing the products they sell. Their products are with 3C Certification, DOT, and E-Mark Certificates. VLAND exports its products to almost all areas of the world.

Some Tips in Choosing your OEM TUNDRA GRILLS Replacement Parts

Buy from reputable companies, preferably those who have been in business for quite some time already.

The longer the company has been in operation, the better are the chances that the product is of high quality.

Always check the compatibility between the product and your car. Even if it looks good, it does not mean it fits. Always prioritize compatibility with the OEM mounting brackets or points to prevent unwanted modifications on the truck.

If in doubt, ask for professional help, or call and inquire from the manufacturer.

A: While the Toyota Tundra Pro Grill upgrades the front fascia of many Tundra variants, it can only fit on Toyota Tundra models from 2014 to 2021. This grill is an excellent replacement for a 2018 Toyota Tundra TRD Pro grill.

Q: Why do I need to replace my 2007 Toyota Tundra Front Grill?

A: A worn-out grill in a Tundra poses a danger to your truck and its occupants if not replaced. The front grill helps protect the radiator, the engine, and the engine bay itself from debris coming from the road or anywhere. Thus, replace the grills if they are worn out or have seen better days already. One fine example of a replacement unit is the 2007 Toyota Tundra Black Grill sold by EAG, an off-road enthusiast’s company.

Q: Are there Toyota Tundra Grills that are ready for customization?

A: A replacement grill from EAG will let you personalize your truck even in a subtle way. There are three replacement models from EAG that will allow you to enjoy a custom Toyota Tundra Grill. The grill surround of these units is coated with a matte-black finish that you can customize however you may want.

A: Not all replacement grills can accommodate the OEM Toyota Emblems the stock grills have. However, the Sherman Replacement Grill can house the Toyota Tundra Grill Emblem from the old one.

TOYOTA TUNDRA GRILLS Conclusion, Our Final Thoughts for the GrillS

Toyota Tundra TRD Pro Front Grille by Toyota is the best and most appealing grill to upgrade your 2014 to 2021 vehicle. Pair the grill with the VLAND Projector Led Headlights, and you will have a winner. The Toyota Tundra TRD Pro Grill has the same materials Toyota uses for its OEM parts, thus assuring a well-made and high-quality replacement product. This grill shows the TOYOTA brand name emblazoned in the middle of the grill instead of the company emblem. The grill makes use of the factory mounts, making the Toyota Tundra Pro Grill easy to install. The VLAND Replacement headlamps complement the TRD Pro Grill very well. The modern looks of the VLAND headlamps can make the 2018 Toyota Tundra Front Grill shine more. The modernist design of the VLAND Headlamps is further elevated, with the TRD Pro Grill sandwiched between them. If you want to go on different adventures with your Tundra, there is one more suggestion you might want to see. The iJDMTOY Hood Scoop Mount 36-Inch LED Ultra Slim Light is compatible with Tundra variants with hood scoops from 2014 to 2021. The iJDMTOY lightbar adds illuminating power to the Tundra. Though not strictly a Toyota Tundra grill lightbar, it occupies a recessed part of the hood bulge, adding function to an otherwise decorative form. With all these complementing aftermarket Toyota Tundra parts, your weekend adventures will never be the same again.