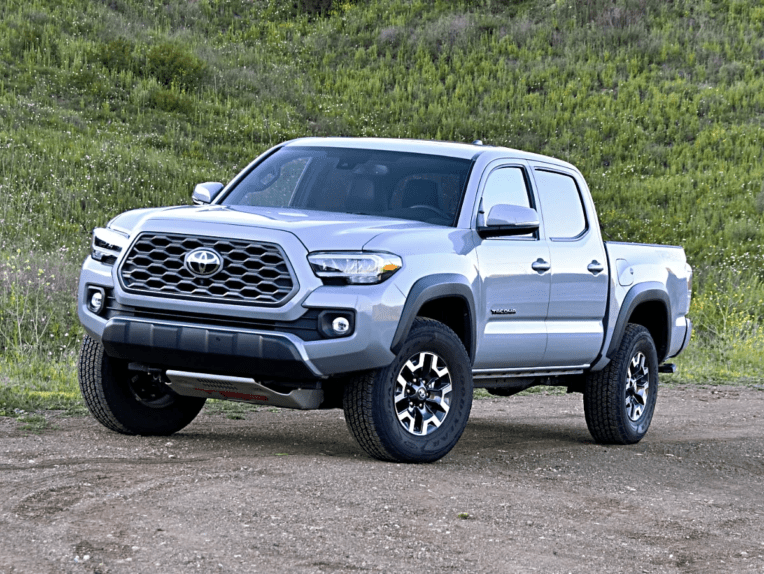 The Toyota Tacoma has been a popular choice for drivers for many years. It’s known for its durability and power, but one of the most commonly asked questions is “How much does a Tacoma weigh?” In this article, we will explore how the weight of the Tacoma has changed over the years. We’ll also take a look at some of the newer features that have been added to the truck. So, if you’re curious about how much your favorite Tacoma weighs, keep reading! When it comes to pickup trucks, weight and towing capacity are important considerations.

But don’t overlook payload capacity, which is the maximum weight your truck can carry in its cargo bed or on its roof. Payload affects how much you can haul for work or play, and it also has an impact on your truck’s overall performance and fuel efficiency.

Overall weight plays a crucial part in determining all of these capacities, so it’s important to understand the difference between curb weight (the weight of the truck on its own) and gross vehicle weight rating (GVRW), which includes the weight of passengers, cargo, and any added aftermarket equipment.

How Much Does a Toyota Tacoma Weigh

The weight of the Toyota Tacoma varies depending on the model and specific features included. The base model weighs approximately 4000 pounds, while a fully loaded Tacoma can weigh up to 4700 pounds. When considering the weight of your truck, it is important to also take into account any additional cargo or equipment that may be added onto the truck. This can significantly increase the weight and affect a number of factors, including towing capacity and fuel efficiency.

But the weight of the Tacoma has changed over the years, with newer models often being heavier than their predecessors. In this article, we’ll look at how the Tacoma’s weight has evolved over time.

How Much Does a 2021 Toyota Tacoma Weigh

Let’s start off by taking a look at the most recent model year of the Tacoma. According to Toyota’s website, the 2021 Tacoma has a curb weight ranging from 4040-4535 pounds, depending on the specific configuration chosen.

But what exactly is “curb weight”? This term refers to the weight of a vehicle with all standard equipment and necessary operating supplies, but without any passengers or cargo. So, while the average 2021 Tacoma weighs around 4250 pounds, keep in mind that the weight can vary depending on the added weight of passengers and cargo.

It’s important to consider a vehicle’s weight when thinking about fuel efficiency and performance capabilities. A heavier vehicle may require more energy to move, leading to potentially lower fuel economy. Additionally, a heavier vehicle may not have as much of a towing or hauling capacity compared to a lighter vehicle.

But at the end of the day, it’s up to personal preference and individual needs as to whether weight is a major factor in your decision-making process. Trim levels also play a role in weight, as certain added features and equipment can increase the overall weight of a vehicle.

Overall, the 2021 Toyota Tacoma has a wide range of curb weights to choose from. It’s up to you to weigh (pun intended) the pros and cons and decide if weight is an important aspect for your needs.

How Much Does a 2019 Toyota Tacoma Weigh

Moving on to the previous model year, the 2019 Tacoma has a curb weight ranging from 4060-4475 pounds, according to Toyota’s website.

Compared to the 2021 Tacoma, there is not a significant difference in weight for the 2019 model. However, it’s important to note that as technology and design advancements are made over time, the weight of the truck changed as well. In 2019, Toyota offered several trim levels of the Tacoma. These included the SR, SR Access Cab, TRD Sport, TRD Off Road, Limited, and TRD Pro. Speaking of the weights of these trim levels, the SR and SR Access Cab have a curb weight of 4060 pounds, the TRD Sport and TRD Off Road weigh in at 4215 pounds, the Limited has a weight of 4380 pounds, and the heaviest is the TRD Pro at 4475 pounds.

Again, these weights may vary slightly depending on added cargo or equipment. What makes the weights between trim levels different is the specific features included. For example, the TRD Pro has added off-road equipment and technology that may contribute to its higher weight compared to the other trim levels.

When compared with its main rivals like the Chevrolet Colorado and the Ford Ranger, the Tacoma falls on the heavier side. The 2019 Chevrolet Colorado has a curb weight ranging from 3939-4483 pounds, while the 2019 Ford Ranger ranges from 3767-4524 pounds. So, while it may not be one of the lightest options in its class, the Tacoma still offers a range of trim level options for those looking for a reliable, durable truck.

How Much Does a 2000 Toyota Tacoma Weigh

Back in 200, trucks were different. The Toyota Tacoma weighed in at about 3900 pounds for a four-wheel drive model with a V-six engine. However, the current models have added more technology and safety features, causing them to weigh in at around 4400 pounds. In 2000, the Tacoma competed with trucks like the Ford Ranger and the Nissan Frontier, both of which weighed less than the Tacoma. However, today’s trucks have increased in weight across all brands due to added features.

How Much Does a 2003 Toyota Tacoma Weigh

Toyota gave the Tacoma some upgrades for 2003. This had an effect on the weight of the truck, depending on which trim level and options were chosen. According to Car & Driver, the lightest 2003 Tacoma weighed in at a little over 3000 pounds, while the heaviest could weigh up to 3700 pounds. The weight difference was attributed to the optional V-six engine and four-wheel drive.

Overall, it’s important to consider the weight of a vehicle when looking at its capabilities for hauling and towing. The 2003 Tacoma had a maximum towing capacity of 3500 pounds, so be sure to factor in the weight of your load when deciding what this truck can handle what you are looking for.

How Much Does a 2005 Toyota Tacoma Weigh

The 2005 Toyota Tacoma weighs in at a hefty 4000 pounds. However, over the years the weight has slowly decreased. The 2019 Toyota Tacoma weighs about 3700 pounds, and the 2021 model has an even lower weight of 3640 pounds. So why the decrease in weight? One contributing factor is that car manufacturers are constantly looking for ways to increase fuel efficiency and decrease emissions. A lighter vehicle requires less energy to move, thus improving its fuel efficiency.

Another factor is the use of different materials in car manufacturing. The Toyota Tacoma now includes more aluminum components, which are lighter than traditional steel parts. So while the weight may not seem like a big deal, these small decreases can add up to a significant difference in fuel efficiency and overall performance. And who doesn’t love saving money at the gas pump?

How Much Does a 2006 Toyota Tacoma Weigh

Much like the previous model year, the 2006 Toyota Tacoma weighs in at about 4000 pounds. The weight of the truck varies slightly depending on trim level and options chosen, but overall, it is similar to the 2005 model.

It’s important to note that while the weight may be comparable to previous years, the 2006 Tacoma did receive some updates including a redesigned exterior and upgraded interior features. These contributed to an improved overall driving experience for the 2006 Tacoma, solidifying its reputation as a reliable truck option. But ultimately, it’s up to personal preference and needs as to whether weight plays a major role in your vehicle purchase decision. If hauling and towing capabilities are important factors for you, be sure to also consider the maximum towing capacity as well.

How Much Does a 2012 Toyota Tacoma Weigh

Now, let’s take a look at the weight of the 2012 Toyota Tacoma. The 2012 Tacoma weighs in at around 3800 pounds, with a slight variation depending on trim level and options. This is slightly less than its predecessor, the 2011 model which weighed about 3900 pounds.

The 2012 Tacoma received updates such as a new grille design and improved interior features, but the decrease in weight was mainly because Toyota used more high-strength steel in the truck’s construction. This not only helped decrease the weight, but also improved safety and overall performance for the 2012 Tacoma.

How Much Does a 2016 Toyota Tacoma Weigh

Compared to 2016, the weight of the Toyota Tacoma has decreased even further. The 2016 model weighs in at around 3700 pounds, with a slight variation depending on trim level and options chosen. The lightest trim level, the SR trim with a regular cab and four-cylinder engine, weighs in at about 3500 pounds. On the other hand, the heaviest trim level, the TRD Pro with a double cab and V-six engine, weighs about 3900 pounds.

As technology and materials continue to improve, we can expect to see even more decreases in weight for future model years of the Toyota Tacoma. And who knows, maybe one day we’ll see a Tacoma weighing less than 3000 pounds!

How Much Does a 2020 Toyota Tacoma Weigh

The final model year we will be discussing in this article is the 2020 Toyota Tacoma. This truck weighs in at about 3650 pounds, with a slight variation depending on trim level and options chosen. If you want the lightest possible Tacoma, choose the SR trim with a regular cab and no added options.

Despite this weight increase over previous years, the 2020 Toyota Tacoma still manages to have impressive hauling and towing capabilities. It can tow up to 6400 pounds and has a maximum payload of 1600 pounds. For a truck that weighs less, you may have to sacrifice some of these capabilities.

How Much Does a Toyota Tacoma Weigh: FAQs

A: The 2019 Toyota Tacoma has an average curb weight of approximately 4060 pounds.

A: The 2021 Toyota Tacoma has an average curb weight of approximately 4090 pounds, slightly heavier than the 2019 model.

Q: How does the weight of a vehicle affect fuel efficiency and performance?

A: Generally speaking, a heavier vehicle will require more energy to move, resulting in lower fuel efficiency. It may also have a slightly decreased performance due to the added weight. However, weight can also affect the vehicle’s ability to handle and maneuver on roads or off-road terrain. Ultimately, it is important to understand the weight of your vehicle and how it may impact its performance in various situations.

Q: Can the weight of a vehicle be altered?

A: Yes, the weight of a vehicle can be altered by adding or removing certain components such as aftermarket accessories or cargo. It is important to consider how these changes may affect the overall performance and fuel efficiency of your vehicle. Additionally, it is crucial to ensure that any alterations do not exceed

Q: What is the lightest pickup truck on the market?

A: According to Consumer Reports, the lightest pickup truck on the market is currently the Chevrolet Colorado at an average curb weight of 3970 pounds. The Ford Ranger and Jeep Gladiator have similar weights, averaging around 4060 pounds.

Q: How to reduce the weight of a vehicle?

A: One way to reduce the weight of a vehicle is by removing any unnecessary or heavy components, such as aftermarket accessories or excess cargo. It may also be possible to switch out heavy components for lighter alternatives, such as using aluminum instead of steel for certain parts.

How Much Does a Toyota Tacoma Weigh: Conclusion

Overall, the weight of the Tacoma has changed over time, with newer models often being heavier than previous years. It’s important to consider a vehicle’s weight in terms of fuel efficiency and performance capabilities, but ultimately it is up to personal preference and needs as to whether weight plays a major role in your purchase decision.