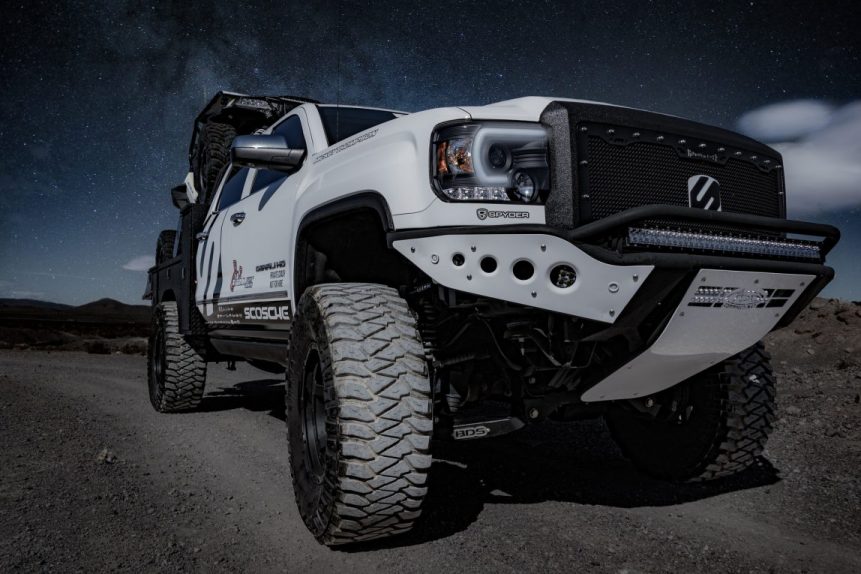 Like other pickup truck headlights, GMC Sierra Headlights also suffer from weather effects and UV radiation. Headlights from 5 years or more ago would most definitely exhibit some discoloration due to exposure to the elements and UV rays. However, with a good portion of elbow grease and the application of harsh chemicals, a determined person can rub away the discoloration. Not to mention the need to invest most of your day to get the desired result. At the end of the day, though, even if you were successful in scrubbing the weather and yellow tarnish off your headlights, in a month or two, they will be back to the tarnished state you started with a month ago. Now why the effort? Because driving with these weathered headlights endangers not only yourself but every other living organism along the way. Weathered headlights diminish your ability to see clearly at night, and consequently, your ability to be seen by other motorists at night.

Why do you need to replace your headlights?

The choice may not be apparent for some people since replacing headlamp bulbs seems to be the more practical and economical way to proceed. Notably, one reason for diminished illumination is that headlight lenses fog up and turn yellow. In such an event, the best way is to find headlight replacements for your vehicle.

The following table presents an array of choices for replacing your GMC Sierra Headlight assemblies. Each has its characteristic that improves from the OEMs headlights that are for replacement.

Akkon has established itself as one of the well-known aftermarket parts suppliers in the American Truck market to date. Their entry into the truck aftermarket headlights industry is not lacking market innovations. DRL LED lights border Akkon’s 2015 GMC Sierra aftermarket headlight. The main lamp is of a projector type manufacture which concentrates light on your path for better illumination. The Headlamp design effectively mixes the old tech with newer lighting technologies.

For an older truck, one way of upgrading its profile is to install a modern version of its headlights, especially when the original headlights have already seen the best of days. One of the best choices for a 2010 GMC Sierra Headlights is the Acanii LED DRL Tube Projector Headlights. They have incorporated DRL LEDs for you to be highly visible on the road and a projector-type lamp to add a modern vibe to the 2013 GMC Sierra Headlights replacements from Acanii.

Akkon was founded in 2015 as an aftermarket automotive parts retailer focused on online retail. Since then, the company has been involved in activities to improve on and innovate on the automotive parts and accessories they sell online. The Research And Development Division of the company continues to work on and develop new products for OEM replacements. According to their website, Akkon has now shipped more than 1,000,000 orders across the country.

The Acanii brand was registered by EJay, LLC in mid-2018. The company sells various vehicle components that range from lightning systems to suspension components. Aside from these, the Acanii brand also sells bumpers, fenders, and automotive parts. There is not much other information on the internet regarding the brand. Its website also offers no information section or an “about us” section as of this writing.

AnzoUSA is an American company based in Southern California. The company has been designing, developing, and manufacturing its products for more than 30 years now. They have their Research and Development Group based in Chino, California. The company utilizes the latest in designing and manufacturing technology and design. Their products are SAE and DOT compliant, and their factory is both ISO 9001 and ISO 14001 Certified.

JSBoyat is primarily a retailer of various automotive parts such as headlights. It has an established presence at Amazon.com where it mainly transacts its business. Other than that, there is not much information regarding JSBoyat.

Bryght automotive parts are sold by BIngbingmotor in the Amazon e-commerce platform. The company’s products are mostly headlights for various automotive makes and models. There is not much information regarding the brand nor Bingbingmotor on the internet. Just like JSBoyat, they have an established presence in Amazon.

Autosaver88 was registered in 2016 as a supplier of various lighting equipment for automobiles. According to its seller page, it is a fast-growing supplier of such equipment including, but not exclusive to automotive headlights. The company has logistics offices across the United States, from Seattle to New Jersey, allowing it to serve orders faster due to the proximity of its offices to the surrounding areas.

Our Other Choices for GMC Sierra Headlights Replacements

AnzoUSA is an American firm engaged in the aftermarket automotive industry for about 30 years already. The company has a design and manufacturing center in Southern California. The company primarily focuses on automotive lighting products. The company has its research and development center, which gives it absolute control over the quality of its products. AnzoUSA products are compliant with various government regulations and industry standards such as SAE and DOT. The headlights are reminiscent of the original headlights.

The C-Tube Bar is an LED light bar that runs around the perimeter of each headlight in a letter C fashion, thus its name. Our choice for the best C-Tube Bar Style for 2010 GMC Sierra Headlights is another entry from Akkon. The C-Tube bar design creates an illusion of encompassing the grille of the GMC Sierra as if framing the upper fascia of the GMC Sierra. The DRL LEDs also upgrade the look of the GMC Sierra. The Akkon GMC Sierra LED Headlights improve your visibility even in the daytime. There are mixed reviews in the installation of the 2010 GMC Sierra Headlights. Some customers in the forums attest to easy installation. However, there are also those reviewers who were a bit challenged when they installed their sets.

Bryght by Bingbingmotor presents modern headlights look for the 2007 to 2013 GMC Sierra. The aftermarket headlights take inspiration from the GMC Sierra’s original headlight design and upgrade its looks. The headlights modernize the front fascia of an erstwhile old truck allowing it to keep up with the more modern aesthetics of its latest counterparts. Bryght Headlights can endure the weather and dusty environments due to their strict adherence to government regulations. There are mixed reactions in their installation; some commented that they did the headlights installation themselves, while some reviewers sought professional services for the installation.

The Oedro 2007 GMC Sierra Headlights Assembly reflects the dimensions of the OEM headlights, thus making them simple to install. Oedro’s approach tends to be close to the aesthetics and specifics of the OEM with subtle differences. Instead of being evolutionarily different, the Oedro approach has forged a path opposite its peers. On the other hand, the company is active in advancing its technology to surpass even the OEM. It seeks to improve on waterproofing, headlight ventilation, and the use of wear-resistant materials. It has also invested much in after sales and customer service, a highlight of its operations.

This even if it has been on the road for about a decade already. The headlights fit like an OEM on your truck, and despite the classic looks, the design incorporates newer and current headlights technology innovations. Some of these are a “Micro-Prism” reflector that directs more light on the road and vents that let moisture and condensation escape without letting it in. The headlights modernize the look of the truck without deviating from the original.

What are Daytime Running Lights?

Daytime Running Lights, or DRLs, were first seen in countries where it is also dark during daytime. The first country to require them is Sweden, in 1977, that is more than 50 years ago. Daytime Running Lights were only required in the country in 1995, when automakers pushed for their inclusion as standard automobile features. In an article in Headlights.com, it is stated that according to National Highway Traffic Safety Administration (NHSTA) studies, DRLs or Daytime Running Lights did make a difference in traffic safety. There was an observed reduction of daytime crashes of light trucks and vans by 5.7%. The US Department of Health and Human Services have also attested to the additional safety DRLs provide.

Is it more practical to change my headlights instead of buffing them to remove discoloration?

Restoring plastic headlight lenses will seem to be more practical, but only in the short run, since you will have to repeat the process again after some time. The more practical way would be to replace them with GMC Sierra Aftermarket headlights which are also SAE and DOT compliant. Some new aftermarket headlights also have warranties for a year. Furthermore, buying new headlights will present to you several choices most of which will upgrade or modernize the look of your truck. For instance, you can opt to buy the latest headlights with the latest innovations. Take the 2007 GMC Sierra Classic Headlights for in

A lot of comments and remarks in the forums have attested to the DIY installs of their GMC Sierra Led Headlights. Some people have been ecstatic that they were able to install their headlights in less than 30 minutes. Some people however, preferred to have them installed by professionals in the industry. The 2006 GMC Sierra Headlights from AnzoUSA are easy to be installed, as per the reviewers and customers who have bought the headlights set.

The GMC Sierra Pickup Truck is one of the more popular trucks in the market today. It is also the workhorse for companies in various industries. The Sierra has been a favorite amongst buyers for decades now since 1963. According to Thenewswheel.com, the truck also won the 2013 Initial Quality award by J.D. Power, an authority in anything automotive. The longevity and popularity of the GMC Sierra prompted a lot of aftermarket truck parts manufacturers to develop their own replacement products for the truck.

The GMC Sierra aftermarket headlights industry came up with many iterations and versions that incorporated various technologies. Thus, allowing old model Sierra trucks to have upgraded aesthetics and front fascia, modernizing the looks and giving new life to the trucks. Innovations such as smoked headlights GMC Sierra edition, LED headlights for GMC Sierra, and even a GMC Sierra Halo Headlight has flooded the market.

With all the choices in the market however, it is sometimes quite difficult to pinpoint or choose exactly what you want for your truck. A lot of factors do come in, like warranties, customer service, ease of installation, and especially, the aesthetics of the product.

The GMC Sierra Headlights products in this article are the best in the categories we have curated for you. Whether you are looking for the best in modern look, the ease of installation, or the best in customer service, we have it covered for you.

Our review has considered all of these to come up with a comprehensive list of GMC Sierra aftermarket headlights to narrow the field for you. In our comparison we present the pros and cons of each product based also on various forums. We hope to have helped you in choosing the right headlight for you and your truck. Happy trucking!

MotoringCrunch.com is a participant in the Amazon Services LLC Associates Program, an affiliate advertising program designed to provide a means for sites to earn advertising fees by advertising and linking to Amazon.com.