After some miscommunications between Samsung and its Filipino arm which accidentally announced that the Samsung Galaxy S2 Android 4.0 Ice Cream Sandwich update would have rolled out a couple days ago, has a carrier gone ahead and confirmed that it will be happening tomorrow at 10am KST tomorrow (March 13th).

The carrier in question is none other than SK Telecom in Korea, the birthplace of the Samsung Galaxy S2. Given that the Galaxy S2 launched back in May in Korea, it comes as no surprise that the latest Android 4.0 update will hit there first. We’ll keep you posted as more develops.

UPDATE: TheVerge reports that The SK Telecom tweet from earlier this morning has been taken down and now is just telling customers to check with the manufacturer for update information. Now we’re not sure what is going here as the official “SamsungTomorrow” Twitter account is telling Galaxy S2 owners that they will receive th update via KIES very “soon,” so it looks like carriers should not have jumped the gun and made any announcements just yet.

Given that US Samsung Galaxy S2 owners will likely be the last to receive the Ice Cream Sandwich update, it is disheartening that the folks in Korea have still to get theirs. Sigh. 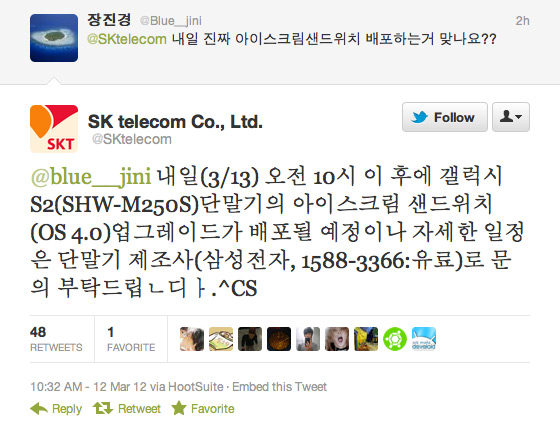 Samsung Galaxy S3 Vs Nexus: Which One’s Best For You?

Samsung Galaxy S3 Android 4.1 Jelly Bean Update In 2013 Only For US Users?